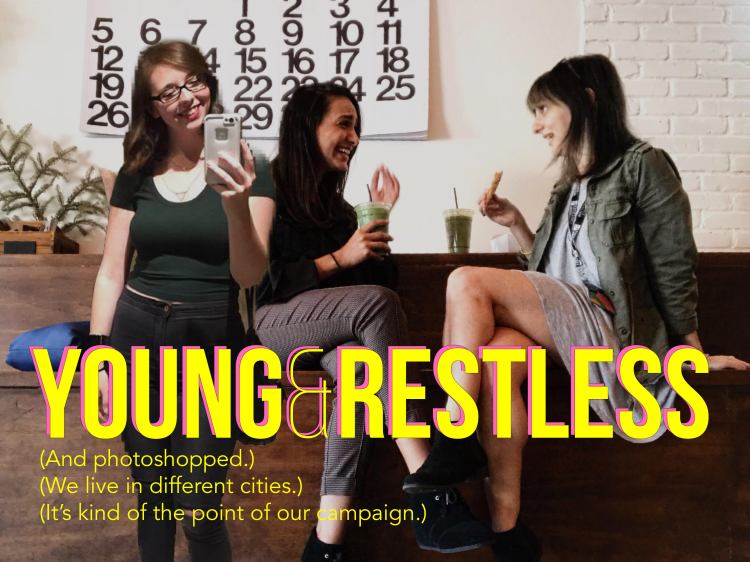 We’re running! Emily Bloch, Cassidy Alexander and Lulu Ramadan, here — and we’re thrilled to let you know that we’re running for the Society of Professional Journalists Florida Pro Chapter board.

SPJ Florida is a statewide chapter and it’s time we act like one. Since Emily, Cassidy and Lulu have joined the board, chapter programs have expanded to north and west Florida, with events happening in Jacksonville, Orlando, Vero Beach and Tallahassee. Now, we want to keep that momentum going.

Our Young & Restless campaign is a slate to get this trio of young, motivated journalists elected into top board positions for the 2019-2020 fiscal year. Together, we work in the field at daily newspapers in three different cities (it’s why we don’t even have a photo of the three of us together — we’ll work on it).

Over the next year, we want to increase programs and expand our market by continuing to host programs all over Florida. A new idea we worked on together this past term was Journalists Against Humanity: a journalism-themed parody of the Cards Against Humanity game. Through a grant from SPJ national, we developed and produced card decks to distribute. This term, we want to bring game-play parties to coffee shops, breweries and venues all over.

We also plan to continue our efforts in teaching the general public about media literacy. This year, we hosted rounds of our Fake News Game Show across the country. We also teamed up with the West Palm Beach library branches to present the game to library patrons. Now, we’re determined to team up with other libraries and other local proprietors throughout Florida to teach news consumers all over about how to know if a story’s credible or not.

Another thing we want to improve on is outreach with local and student newsrooms. In the past under our watch, we helped bring free training to newsrooms including a Facebook for Journalists seminar at The Orlando Sentinel and a story workshopping session at Westside High School in Jacksonville. The more we can expand our chapter coverage in Florida, the more we can make sure all newsrooms — both student and professional — have equal access to helpful resources.

We’re confident our Young & Restless slate is the best way to bring these ideas to life. Now, we just need your vote — and your ideas.

We want to encourage journalists from all over Florida to consider joining SPJ. Once becoming a national member, participation in the Florida chapter is free. Make sure you mark Florida as your local chapter when prompted! You can also email us with your ideas.

In the meantime, here’s a little more about ourselves and what role we’re up for:

Emily’s an education reporter for the Florida Times-Union in Jacksonville and a regular contributor to Teen Vogue. She’s been an SPJ member since 2012 and a board member since 2016. Most recently, Emily served as SPJ Florida’s VP of Programs for two terms. While in that position, Emily helped create and promote multiple programs that have since spread nationally.

Cassidy’s also an education reporter. She works for the Daytona Beach News-Journal, and formerly covered county government for a weekly paper in Sarasota. She’s been on the SPJ board for one year — just long enough to get a grip on how the organization works, and how to help improve it.

Lulu is a staff reporter at The Palm Beach Post, covering government and politics in Palm Beach County. She’s been on the SPJ Florida board for just over a year and has participated in several programs, including Muslimedia, The Fake News Game Show and training at high school journalism conventions.